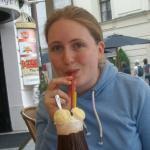 I set my alarm for 7am this morning so that we could make an early start. Our aim was to have an early morning stroll around the walled city of Carcassonne before the hordes of tourists descended on it. It wasn't a very sunny morning when we opened the curtains and it felt like a bit of a struggle to get out of bed, but it was worth it to have the town almost to ourselves

We started by walking around the centre of town.

There really was hardly another soul in sight.

And even though there wasn't a blue sky, this view of the chateau and the basilica was still beautiful.

After strolling round the town for a while, we passed through a gate and began to walk around between the inner and outer walls.

This gave us some fantastic views of the turreted towers...

...and there was still hardly anyone else in sight

Eventually we passed through the main gate in the outer wall...

...and began to leave the old city behind us...

as we started our descent into the lower town.

The more modern part of Carcassonne is actually very pretty too, although I suspect it often gets overshadowed by the walled town.

As we walked further into the town, we kept looking over our shoulders for a view of the fortifications behind us.

The further we walked, the better that view got.

The best view of all was probably the one from the middle of the old bridge.

Once over the old bridge, we were in the centre of the new town.

We found a brasserie serving breakfast near the train station, then bought tickets for the 10.32 train to Béziers.

The journey from Carcassonne only takes 45 minutes, but our tickets entitled us to seats in carriage 6. Tim had seat 84 and I had seat 87, so unfortunately we weren't going to be next to each other, but we expected we would still be sitting pretty close. We boarded the train at the correct carriage and Tim instantly found seat 87 for me. Excellent. He walked a couple of steps further down the train to find seat 84, but was soon turning around in confusion and coming back to where he had started. Inexplicably, there was a gap in the seats between 77 and 85, so that the numbering on the electronic displays jumped straight from 75 - 76 to 86 - 87. Much to our dismay, seat 84 simply didn't exist! We weren't the only ones to be annoyed; Tim soon encountered another man who had been sold seat 94... but 87 was the final seat in the carriage!

It all ended happily in the end, because the other man walked further down the train and found another carriage with spaces in it, then came back to let us know

But it didn't do much to improve our impression of the efficiency of French trains; it all seemed very reminiscent of the time we got sold a reservation for seats 33 and 34 on a bus to Budva that only had 27 seats.

Anyway, the good news was that when we stepped off the train in Béziers, the weather had improved and we were treated to a beautiful blue sky once more.

Béziers is one of the oldest towns in France, with evidence of settlements dating back to the fifth century BC. We wanted to visit because we had seen some beautiful pictures online of the town's cathedral, towering above a river. We were impressed already when we walked straight out of the train station and into a landscaped park.

At the entrance to the park was an enormous war memorial, surrounded by French flags.

The path through the park led steeply uphill and we soon caught sight of this unusual monument in the distance.

Eventually we climbed up beside it and had a wonderful view of the surrounding countryside.

We were now in the centre of the town and first impressions were promising.

I particularly loved these colourful displays of umbrellas which were hanging in some of the streets.

There was a tourist information office in the main square, from where we were able to get a map of the town and plan what we wanted to see.

The main attraction was definitely going to be the cathedral.

The cathedral is perched on the edge of a steep hill and so from the square outside it we were able to see for miles.

The hill overlooks the river Orb, and our next goal was to climb down and find the town's old bridge, from where we should be able to get the views back up towards the town that we had already been admiring on the Internet. It looked a long way down though!

We set off through the streets once more, following signs for the bridge.

Eventually we got down to river level...

...and managed to see the picture postcard view of Béziers for ourselves

It was a view definitely worth climbing down for.

Having walked across a newer bridge to start with, we then went back across the river on the old bridge...

...and began our ascent back up to the main town.

We were fairly tired by the time we got back to the top of the hill, so found a nice restaurant where we could sit outside and have some lunch.

There was plenty more to see in Béziers in the afternoon.

We even managed to find a market under the trees, where Tim was able to stock up on some French books.

When it was time to return to the station, we walked through the park once more...

...and even found a friendly local cat.

We thought our train back to Carcassonne was supposed to be at 15.40, but when we got to the station it was a bit unclear so Tim went to the information desk to double-check. The man behind the desk confirmed that the train was indeed at 15.40, although for some reason that train hadn't been showing as an option on the electronic ticket machine we'd consulted. Just to make 100% sure, Tim clarified that that was the 15.40 train to Perpignan and the man agreed, so we set off to catch the train.

It was a pleasant journey and we expected it would take around 45 minutes again. After about half an hour though, I looked up from my book and was a bit surprised to see this out of the window.

Although Béziers itself is only a few miles from the coast, Carcassonne is firmly inland and there's no reason at all why a train from Béziers to Carcassonne ought to be driving past scenery which looks like this.

The view from the train window between Béziers and Carcassonne ought to look more like this.

I was hit by a horrible feeling that this train was going to Perpignan via a route which wasn't taking it anywhere near Carcassonne at all. When we consulted the display board with the list of upcoming stations, we realised this was indeed the case. Oh dear.

Around 5pm we arrived in Perpignan. While we did enjoy our time in Perpignan last week, we hadn't expected to be back there quite so soon. Having consulted a map of the regional train lines, we now realised that we should have got off the train at the first stop of Narbonne in order to get a connecting train to Carcassonne, but the man at the information desk in Beziers hadn't made any reference to us needing to change trains, which was very frustrating.

There was a train back in the direction of Béziers leaving at 17.15. We decided to chance getting on it without buying new tickets as far as Narbonne. We didn't feel like this misunderstanding was our fault and the regional trains don't always have a conductor checking the tickets anyway... although once the train started moving we quickly realised that this one did! Luckily for us he was very reasonable and when Tim explained to him what had happened, he seemed to take pity on us and didn't try to fine us for not having the right tickets. Phew

Once in Narbonne, we had just four minutes to make our connection to Carcassonne but we managed it, and luckily this train turned out to have a very understanding conductor too, who didn't complain that our tickets had been validated several hours ago and even apologised for the poor quality of information we'd received in Béziers.

By 7pm we were back in Carcassonne and walking back to the walled city for the last time. We've had an amazing holiday for the past two weeks, and I think being able to stay here has been the icing on the cake

You will be able to leave a comment after signing in