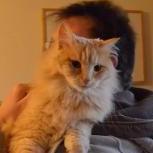 Trakai was lots of fun earlier (and the postcard display suggests it's even better in winter) but the temperature here is surprisingly oppressive. Not the first thing that comes to mind when you think of the Baltics. So we hid out for a couple of hours in our apartment before heading out for an evening stroll and in search of food.

We headed into town along our usual route but headed a little further than we did yesterday, which meant we encountered a new building:

That blue sky is as bright as ever:

It became clear when we could hear a few English voices that we were in a tourist area. Well, of course we were; Vilnius is only small and we were on a main road. Although we could see a few restaurants we didn't want to risk any tourists arriving afterwards and sitting by us, so we decided to head to the back streets. They weren't unknown to us because we'd briefly stepped there previously after coming down from Gediminas's Tower on our previous visit. We soon saw some familiar sights, such as on old church:

It made for a striking partnership when the upper part was viewed alongside the neighbouring church:

The only problem with our plan to escape the tourists is that there didn't appear to be any restaurants here, so we decided to head round to the town's main road. En route we caught a glimpse of Gediminas's Tower:

The tower by the cathedral still looks like a space rocket:

But alongside the cathedral it makes for a good pair:

We grabbed our meal at a chain restaurant, opting for a local speciality; some kind of ham pancakes:

As often occurs on our jaunts the meal seemed very small; I suspect we're spoilt back home. And so we headed out still rather hungry, but encountering unexpectedly a series of hot-air balloons in the sky:

Our route home took us past another pretty church which we'd seen before on our first visit:

And after a lengthy stroll we saw the pink church which indicated we were almost back home. The same seemed true for the few remaining hot-air balloons:

We're not yet sure what we're going to do tomorrow. We have all day plus most of Sunday in Vilnius. Given how cheap the trains are, I expect we'll decide to go to somewhere else tomorrow on the spur of the moment.

You will be able to leave a comment after signing in